DAY 5
The tour is running thick and fast and we are not getting enough time to blog our adventures. Later...  Culloden, Leoch... four poster beds.... a saw-bones..


Mare: “Days are going too fast. Our stop at the split standing stones was awesome. Had to be pulled back before I disappeared all the way into 1773. Weather has been spectacular, only a smidgen of rain.  Are we really in Scotland?  On our way to the islands this afternoon with an important stop for a twelvesy at a coffee shop for a piece of cake and a brew.  Everyone's enjoying the silent movies to go along with the coffee. Life is good and we are having one terrific time. I think we will sign up for two more weeks, please.”

Carolyn: “Oh dear. It's been a couple of days of great touring all over – out in the forests, along the streams, munching on a picnic lunch out in the quiet woods where Jamie and Claire would've wandered, perhaps on their honeymoon and on to 'Leoch' and Culloden.  So much sadness on that moor, can feel it even now, not to mention the visual presentations on posters and in a short movie.  Couldn't keep out the tears...         Then, lucky us – we spent the night in the castle last night waaay up at the top in an elegant room with, alas, no ghosties or bumps in the night to disturb our sleep.  Can't say that bothered me so awfully much.  Treated to a devoted Jacobite presenting his story of the battle, dressed in his tartan, complete with the weapons, targe and sporran. He took a lot of time answering our many questions after his presentation which was quite fine.  Now, on to another day of travelling surprises that keep us on our toes and delightedly guessing. We are so enjoying every moment of this trip.”

I returned to our tent tonight to find we had a new friend – our very own wee Cheety has moved in. Cat hair everywhere.  Tonight the sun goes down on the Beauly Firth and it doesna look half bad. PIC 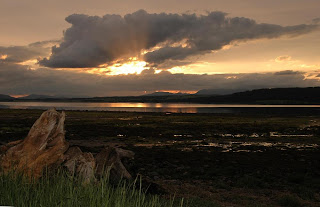 DAY 6
Today we went to Castle Leod.   Lord John is not at home today, but like us, he's on his way to the Outer Isles, so we might see him there.  So, instead of going into the castle, we sat below it on the sward and had Tales in the sun of the MacKenzies, namely Coinneach Obhar, the Bràthain Seer, upon whom the Seer of Lord Lovat is based in Dragonfly. PIC: Tales at Castle Leod. 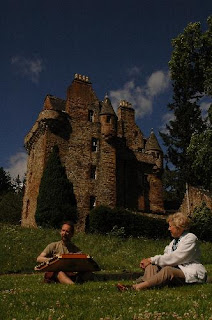 To the Isles we go today.  Our Islands adventure begins.  To remote Leodhais we go, “The Edge of the World” as some would have it. 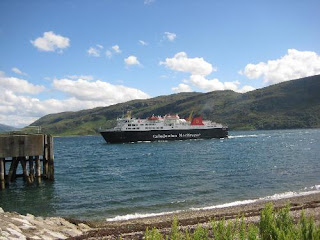 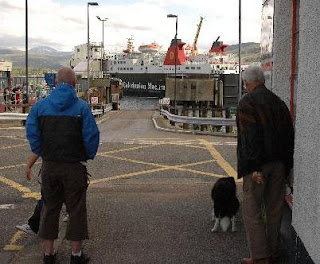 After waiting in a sunny blowy Ullapool for a late ferry and some stevedores who seemed in no rush to load us, we made the three hour journey on a fairly calm sea.  There was even a hint of a porpoise or dolphin pod.
The sea was as bright as a mirror in the sun and after a couple of hours the islands began to appear out of the clouds and rain showers.
Our host this night is a Leodhasach crofter, who keeps pigs, geese chickens and three crofts.  The house sits with a view of Tursachan Calanais, the largest of the many stone circles and alignments in this amazing collection.

It's nice to see that Aven and others are following the blog of this tour. Who else is lurking out there?  Make a comment below and share a thought.

Carolyn:  Anything left of me after being blown three sheets to the wind up to the broch? People who lived here in Lewis must've been/are hardy folk, and precious few with the lack of arable land and plenty of rock all over the hills!  OK, compared to Ohio, this is another planet, which of course is why I'm loving this side trip to the island.  Our B and B hosts treating us to their droll sense of humor complete with the eye twinkles added a touch of fun to our beautiful breakfast.”
PIC: Broch. 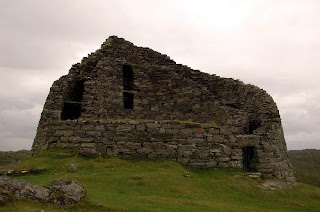 Mare: I don't remember a fiercer wind than the one on the top of the hill at the broch. 'Twas once a strategic defense site as well as a family home and barn.  Amazing how these resourceful people managed to survive and thrive in these rugged conditions. Shared the pathway with some vocal sheep on the way down. Don't see THAT in Michigan.

Just had a most unique and delightful stop at the local weaver of Harris tweeds. Norman MacKenzie was in his wee loom shed, working on a gray design on a 60-year old single width loom.  His business was out in the countryside near our B&B and we just happened on it.  Mr. MacKenzie demonstrated how his loom worked and gave us a running commentary. We picked out our favorite tweed to purchase from his wee wall of bolts he had woven. All this going on in a workroom of about 10 by 14 feet! Mr. MacKenzie – a new friend on the island of Lewis for all of us. Next time we're here we coming back!”
PIC: Norman MacKenzie, Weaver, at his 60 year old loom.
PIC: Norman with our cloth.  “The Looms Norman! The Looms!” 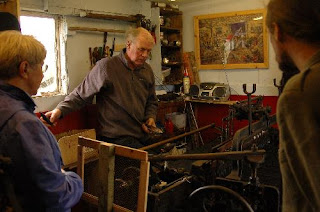 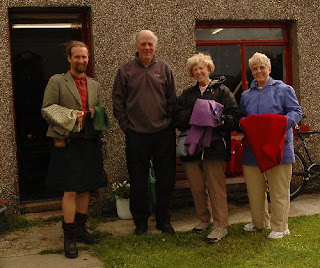 Scot: “It's raining in Leodhais, at the minute, mainly from the side.  It will be bright and bidh grian ann a-rithist air a'mhionaid (the sun will be out again in a minute) but I am waiting in the car, while the women of the party visit a Harris tweed handbag shop.”
PIC: The Norse Mill and Kiln.
PIC: Eaglas Moluag. 900 year old church 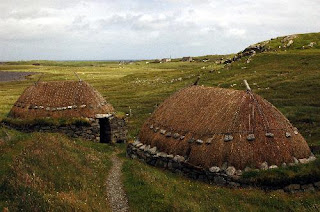 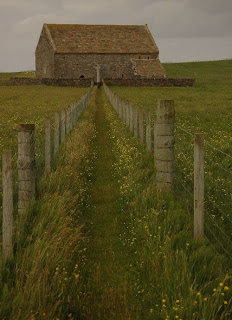 Carolyn: “Learning about Black Houses up here in the windy seaside hills, and what better way than to see a well kept historical one (I should think most of them are truly historic!) than to be guided by a 14 year old young man with knowledge and confidence, not to mention a cute smile and the perspective of youth!”
PIC: Donald, our guide 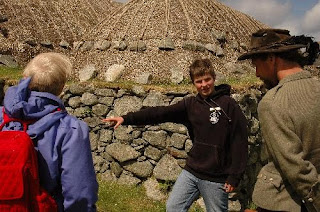 PIC: the range in the new house. 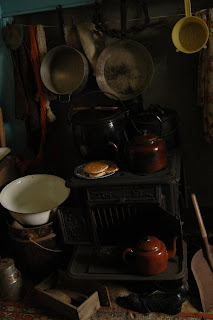 To be honest, there were too many pictures to put on this page from today.  Even more will no doubt be taken tomorrow.

Sam:  Well it is Scotland in July and here's the rain right on schedule!  We've be dodging huge drops yesterday and today and outrunning clouds around the isles only to experience winds strong enough to blow a person over the craggy edges of the Today has been a little cliffs down to the sea.  The color of the water near the shore is Caribbean blue-green with the waves creating clouds of foam over the rocks below.  We see many ruins along the way of the old Black Houses which used to stand against the long green crofts.  It's amazing to think how all these people survived back then.  Though a brutal move from their land, was this actually a good move in the long run as many people were cleared and left the Motherland for the new world.  Many people survived, some even prospered.  The ones who remain and developed into the faces of the young that we see now are still a hardy bunch and still have to find many ways to survive, physically and financially on these islands off an island.  There are grandchildren who return to their family lands now and there are 'incomers' who were enchanted by the land and peaceful way of life.  Still, the small schools are being closed year after year for lack of new generations to fill them.

Yesterday was a very full day.  The Sisters tell me they counted 11 places that we visited.  Today has been a little easier to keep track of.  We headed south to Na Hearadh – Harris – which probably is Norse for “really big hills”.  First though, we went west to the Isle of Bearnaraigh where Scot and Mare braved the horizontal rain to be in the presence of a strange stone alignment that is a half moon right on the edge of the cliff above the narrows between the islands.  From there we went to a very special place, an iron age village in the dunes that has one house rebuilt.  The other five are still under the sand.  There is so much to see out here that we have had to pick just a few things otherwise we'll be too full of experiences, worn out and never get to Harris.
PICS: windswept buildings. 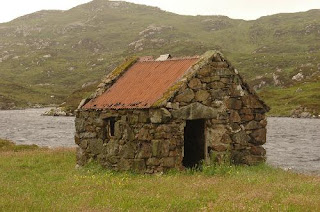 We have had a guess as to the identity of the mystery “thing” picture from a few days ago.  Conny from the tour last year thought it was a Haggis.  Well, I can reveal that it is not, but it was a fair   suggestion.  Wrong plumage, dear.  Watch out for the comments below the post.  Place your own.  Prize to be won.
PIC: mystery thing. 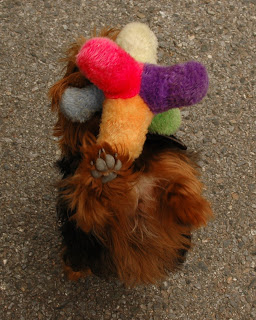 Later: The ferry off the island had been cancelled today due to the wind.   As it reached gale force, we ran (were blown) to the hotel where panacotta awaited us, gently followed by Scot's harp and Silkie Tales of Lighthouses and Storms, to fit the mood.  We were joined in ceilidh by a Dutch couple – always nice to find friends that we haven't met yet.  The savage temper of the Atlantic beast must have been soothed by having its spirit called in the Tales, for the wind dropped as we made our way home in the dusk at 11pm.  Oidhche mhath, cadal gu math.  Good night, sleep well.

The beaches on Harris are spectacular – white, clean, and even today in the cold and rain, little kids were frolicking in the water. Looking for Puff the Magic Dragon I think.”

Care:  “Then along came some wild and woolly sheep dog, galloping along the sand, hoping to make friends. Loving dogs, that made the beach for me, even though they themselves were startlingly white and quite decorative (patterns from what? Assorted minerals, wave action...whatever).  I think I have never seen so much rock in one place as here on Harris, not even counting the Grand Canyon. Would think that the presence of so much rock might be somewhat depressive should I live here for any number of years. But today, they were beautiful.”
PIC: Tweed Heaven. It's where all the plaid goes when it dies.  Scot has gone to heaven too, buying it back. 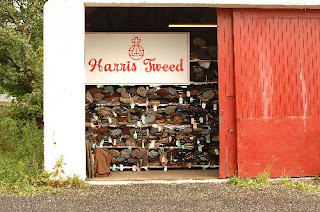 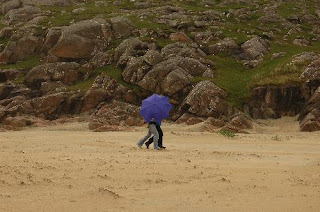 GOTO the last posting in this tour blog