Well, here we are marking the important day by rising before dawn and walking to the top of the ridge to get a view of the rising Sun at the turning point of the dark half of the year. We Celts have celebrated this day, and tomorrow (the Dead Day), for a verra long time. It is the death of the Sun; death of the year; death of all that was. All those present moments and future ideas of 2008 become the "past" over the next two days. It is a time of introspection, of tidying up the memories and laying them in the mid-winter fire. Then, on the 23rd of December, we begin again; the Sun is reborn, for out of death always comes new life.

(What did you think the fat man in the red and white furs was for? giving you presents? No, that's St Nicholas. The man who comes down the chimney to the hearth fire brings the Sun back. Read The Hogfather by Terry Pratchett and 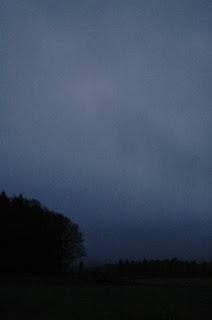 everything will be clear).
As you can see from these photos, not much evidence of Grandfather Sun this solstice. A near gale force wind buffeting us as we climbed the ridge.

Not a day to inspire, no?

Well yes. We have reached the mid point of darkness; we have come to the end of a cycle within our lives, with a new one just beginning. What is not to feel optimistic about there? It's akin to coming to the end of a job, with new ways of being ahead. It's like graduation without knowing what is next; it's like finally saying goodbye to a relationship (with all that it had) and looking to a new future.
We can respond with fear, paralysis; as many of us do.
-AND-
We can respond with engagement, plan, aspiration.

In the middle of the coldest, darkest part of our calendar, this is when we plant our seeds beneath the ground and shelter them in small pots. What seeds will sprout into seedlings fo 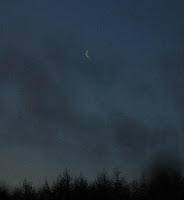 r us by the spring equinox? Well, it depends what seeds we plant today...

P.S. Here is a Solstice song for you to enjoy: "Solstice Bells"
by Jethro Tull
Go out for a walk and enjoy the constant beauty of nature. When it comes down to it, your good health and the natural world are all the really matter. May you enjoy an abundance of both in this new year, and may the seeds you sew, or the door you open, or the pallet you paint on be of your own choosing.
Solstice Greetings, Samantha 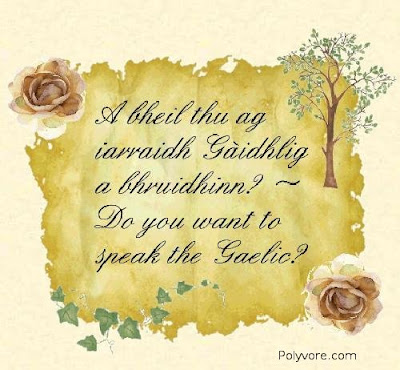 I've read a lot of posts on the Outlander Gathering forum recently by people who want to learn Gaelic / Gàidhlig. Below is a web site that has listings for classes and distant learning in many states. Also, check within your state's local adult / evening courses; usually found through a search engine or yellow pages. If there is not a course near you, check with the instructor of any course within your state, chances are they will have a network of Gaelic speakers and instructors, and you may just be the catalyst to get a class going in your area. http://www.acgamerica.org/

Study Gaelic through distance learning. This usually involves receiving your lesson materials through the mail, then having a lesson by phone once a week. Sometimes there is also an annual gathering of the students for a day or weekend, where you can bashfully practice on each other, and get in-person support from the instructor. The money you save on gasoline weekly and the reduction in your carbon footprint are additional benefits. If you want to save money on your phone call, try services like SKYPE.COM - You can download this internet telephone connection to your computer, which you use to call your instructor (or anyone else you wish). It's very cheap, and if you're calling another Skype user, I believe it's free.

If you're coming over here for the Jamie & Claire Tour – for Outlandish Spirits, start learning now, and use your knowledge to share light banter with Scottish Gaelic speakers. Who knows, maybe you'll find a strapping Highlander to practice on!

So, go hence into yonder world and spread the Gaelic words of love. If you know of any classes or instructors not already on the above link, please let me know, and I'll add them onto a list. Mar sin leibh an-drasta, Samantha

An Apparition In The Snow

Note: Please also check out: How Has Outlander Inspired Your Life /Nov 24th. I'd love to hear more of your responses!

On November 23rd we had our first snowfall since moving into our cottage this year. I woke up pretty early, and decided to take a pre-dawn photo of our house in snow. The whiteness filled the air with a dense mist, and I could see the silhouette of the trees leading up the road, one of the few things visible, colorless against the white engulfing background.

As I stood there focused on my mission to get one good photo of the stone cottage against the white background, I heard a funny sort of 'animal sound'. Not a sheep; they were well across the field. More of a grumble (not a growl). Admittedly, the sound gave me a bit of the shivers, but it was coming from up the road. I looked up the road and thought I saw something on the left side heading towards the bushes.

I dismissed the grey apparition as my imagination and went back inside. When the sun peaked over the horizon, I went back outside to photograph from the crossroads. There, I saw animal tracks in the new snow. They looked a bit like a cat's, but were longer in shape and quite a bit larger than a domestic cat, and being the only house for almost half a mile, I knew it wasn't domestic. I ran inside and got my husband out of bed on a Sunday morning, which, in this case was surprisingly easy to do, but when he heard the reason for such a rude awakening in the depths of a winter morning on his day off, he was on his feet faster than I'd seen in years.

We followed the tracks which had led past our wee house, to the crossroads, and onwards. They went up onto the stone dyke wall and back down again, then crossed the road to the left side...... just at the point where I thought I had seen something earlier. We took photos of the tracks, and I've sent them off to Russell Coope, in north Perthshire, who is an expert on Scottish Wild Cats and animal tracks, and has been studying the cats for 30 years. Though we don't know what the tracks are. Hopefully he will be able to tell us if it is this endangered species at our own doorstep or some other wascally Scottish beastie! Any guess as to what they may be?