This is a post for Jamie and Claire Tour "Lurkers".  You know who you are :D

There are a few spaces left on each tour, with great interest from some already.  So yes, they are going fast.... especially the May Tour.  There are only 3 weeks left to sign on to the MAY tour.

Sam's been working 4 hours already this Saturday morning sending out receipts, forms and answering enquiries , she tells me, and it's only half past ten.  I'm off to my dude shed.

Something to look forward to

It's been mad busy here at Tour Central.  Sam is furiously signing up tour guests for this year (everybody gets Christmas out of the way then they all book their outlandish adventures in January).

We spent Christmas up on Loch Ness at a hunting lodge that likes us to play Scottish Hosts for their Christmas guests (there is a point to this story).

As part of the activities we took a couple of the guests on a hunt for Uamh Bonaidh Obhair, Dun Bonnet's Cave, which is not far away, so we had been told.  The literati will know that this is where James Fraser, 9th of Foyers lived for seven years after the defeat of the Jacobites, (I told you there was a point to the story).


We did eventually find the cave, and it was not easy, as you might expect, even with detailed directions.  How else would James Fraser have managed to hide for so long with the place regularly patrolled by Redcoats?


The story of the servant boy being challenged by Redcoats while carrying a cask of ale is also true.  His hand was severed by a sword slash and the cask fell into the river.  The place is still known as Leap o' the Cask.

James Fraser eventually came out of the cave.  I am not sure whether he went to France, following so many exiles, or whether he was pardoned, but either way, he died just eight years later, in 1760 at the age of about 54.  I did wonder whether seven years in a cold, damp cave shortened his life.


So what is "something to look forward to"?  The May tour this year is for those who are not averse to climbing the odd hill (on hands and knees if need be), and given the somewhat inaccessible location of this cave, we might take the opportunity that May offers to go there with the Tour.  Even if we don't, I'm looking forward to the coming of the Spring and the Highland adventure.  We have seven on this tour so far.  I can't wait to meet them and learn about their personalities, their stories, their humour.  And of course the unique tour name they will give to their adventure.

Sam wanted me to let yeze all know that "all tours have reached minimum lift-off numbers for the coming year (yay!) and there is still space on all but the June and August Western Isles tours."

Where are we today?


Where are Scot and Sam travelling to and being Outlandish in today? 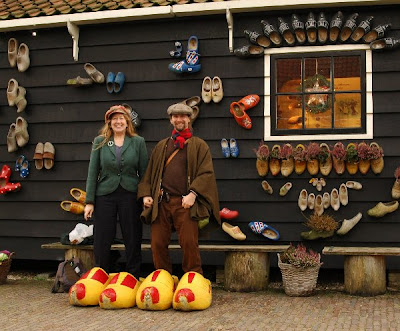 Any ideas?  Clues in the photo.