I'm a wee bit cock a hoop.  I'm just after uploading my new website www.ansgeulaiche.co.uk which contains the new tour


"Journey to the Western Isles"
This is the tour we took The Sisters on last year, with a few tweeks.

The Western Isles are a real pilgrimage for the traveler - it takes a couple of days to get there - so they don't get much visited.  This is why we're looking forward to sharing their beauty with visitors who don't have the time to hire the camels, find an interpreter guide... 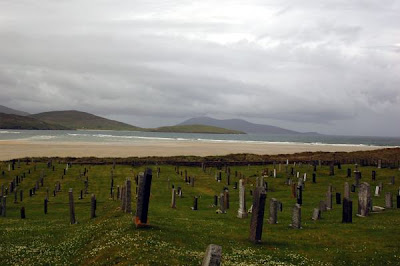 The scenery is beyond words (and photos).  Imagine standing on the windy driven shores looking west out over the slate blue Atlantic, knowing that the next parish is America.  Nothing but gulls, storms and the cluster of rocks called St Kilda between you and the lands that many of these hardy folk were forced to emigrate to in the 19th Century.

I expound too much.  Go see the website and let me know it's all working well.
Moran Taing, many thanks, Scot
www.ansgeulaiche.co.uk 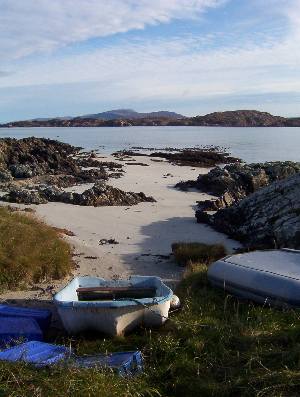 To Lallybroch We Go

So the May Tour Outlandish Spirits are going to be in for a treat. Amongst a surprise here or there we've told them that they're staying in their own Scottish Lallybroch.
With a 5 star reputation and lovely décor and everything in ship-shape order (Jenny would approve), our group will experience their own wee Estate lifestyle. They'll have time to walk the corridors, now carpeted, to sleep in the luxurious beds (probably no longer feathers and horsehair), to sit in the parlor with the fire and to gaze from the large sash windows out onto the great Scottish outdoors. They'll have first class dining experience around a big family table and a fantastic Scottish breakfast in the morning (if they have any room left). The stay is a new location and is a wee extra that Sam has been working on for the May tour guests. It'll be unique to them as it's probably a one time visit this year. 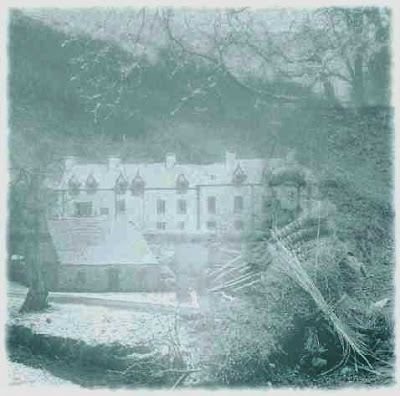 I've just checked with Herself, and she can make room for an eager one or two, but the tour closes very soon.
We have spring here today. Herself was working on her flower bed and I was making sure we'll be warm in the coming winter - chopping logs.

Luchd-leanntain (followers).
I now declare this blogspot "a place where we journal the tours as they are happening and also a public scratch-pad where we invite you to play with new tour ideas that we are considering".

That work for you?

As you might have understood, the way Sam's J&C tours work is that each one is a little different, based on the personalities that emerge as the guests sign on.  We like them to be a bit bespoke /tailored, without charging a custom tour rate.  It's more work for Sam, but we think it's worth it.
So, here's something we'd like the Outlandish Club to muse on.


LOWER MOBILITY
Sam is looking into a lower-mobility Jamie and Claire Tour.  We're thinking it would run in a second vehicle, in parallel to the usual tour, perhaps this September if there are enough takers.  The walks would be shorter, flatter, etc.

We're even looking into hiring mobility scooters for those who need that kind of support to be Outlandish.

The two parties of the tour (two vehicles) would meet for lunch or dinner, sharing different adventures from the day, and people could swap between these two slightly different itineraries as needed.  Both vans would cover pretty much the same tour locations and itinerary.
What say you lot to a lower mobility option in September?
Scot, inveterate curmudgeon and blog stealer.


DAY 6,
Castling – an obscure move in chess.
Our first adventure today was the lasses playing at The Falls of Dochart, a shallow, wide cascade that drops through the village. A light frost last night left rock-pools with a paper thin layer of ice for them to play with.
A stunning drive in the sun over the Sacred Hill of The Caledon Tribe (Shiehallion) took us along a single track road that is a favourite of mine for the birch trees and the loch. I took a picture from the viewpoint (at last, I hear the cry, some scenery). Here, the girls began to play on a rock amidst the trees. Charlie reflected that he can usually tell the quality of a place by his daughters' behaviour, especially Ella. They were playing a fairy princesses I think; the spot has a really comfortable and open feel to it.

A bit of shopping followed once we got to Pitlochry, during which Cee Cee got a new hat to match her overall love of pink. Note the spangley boots. If they'd fit me, I'd have them off her feet. 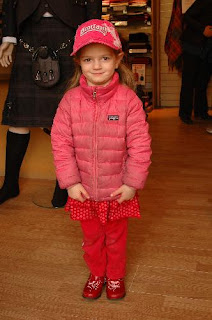 We arrived an hour ago in the domicile of choice, Dalmunzie, to go a' castling. We've been lauding it as a castle to the party, but it's really a hunting lodge. Many were built in the Victorian period in remote parts of Scotland. This one is suitably antiquated. The corridors are wood panelled and narrow (for servants), the plumbing antiquated, the floors slope, lots of quirky charm and the rooms have been done out nicely in a period style. There's a distinct lack of modernisation to this place, which is to its credit. If you want a hotel with a pool, mobile phone reception and a lift that goes to the top (there is actually a lift, surprisingly) then go to a hotel that has these things. This place is about last century charm. The dinner this evening was fantastic. The “Kitchen Brigade” did a fine job. 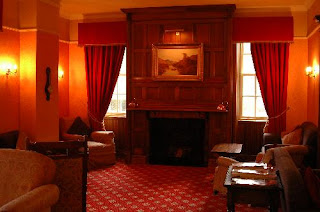 It's been grand to have Aven blogging along with us, and of course the Silent Majority. Share the adventure one and all! Speaking of sharing adventure, the current idea is that the next May Jamie and Claire tour will cover new book territory. Sam is lining up a stay in Lallybroch, which is new, but that also puts us in a different park of Scotland that would allow us to do the whole Claire Fraser, Army surgeon in the battle of Gladsmuir; Jamie et al sneaking through the bog in the dawn fog to surprise General Cope's sleeping army. Looking forward to that one.
So, luchd-leanntain (that's gaidhlig for “followers”), today is the last day of the tour for the Barr-Welles family. They will probably do a bit of yomping on the hills around the castle afore we leave for Glasgow. I've put in a few pics of the locale for your benefit. 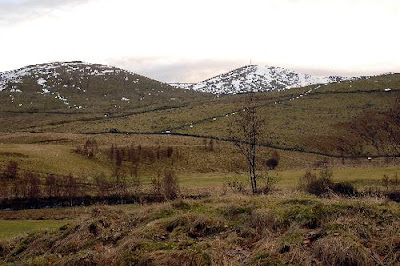 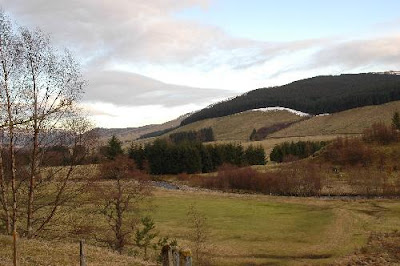 Today, in the lost glens of the Highlands, the sun shone. It was even warm.  The whole place had a beautiful glow about it as the low light brought a vibrancy to the greens and rusts of grass and braken.  The Birch twigs were especially beautiful in the muted purple, colonising the hillside.

Sam took our family up a big hill to experience a major marker on a ley-line of earth energy.  It's a place that never fails to impress.  Grandeur oozes, light moves, the sky opens and closes, breezes caress, time moves and doesn't.  I'm sure you know the kind of place.  I'd say that it worked for our guests.


Jenn: “The sun was shining. The time was spacious.”
Assata: "There were lots of rocks that were really fun to climb on. The rushing stream was loud and pretty. We saw the Fairy Circle. There was no wind. There were sheep with orange spots. One on each sheep.” 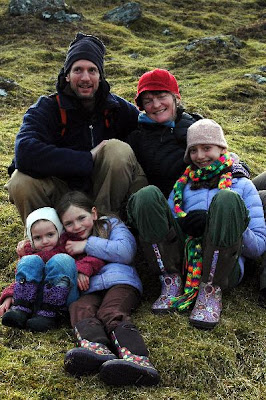 This area of the Highlands is particularly noted for both its human remoteness and the large number of markers on the energy lines of the earth.
If you are not familiar with these lines, ley-lines, then think of them as a cobweb of energy flows covering the globe, like the tiny veins in the human body.  Although not well understood, they seem to be generated in part from the fault lines and geological anomalies below the surface.  They are then diverted and focused by things like natural boulders, water, standing stones, pylons etc.  They are often felt by humans simply as a place that has a nice, or otherwise, atmosphere, for no obvious reason.  In Celtic lands, we tend to mark junctions and other notables along them with churches, standing stones, burial grounds as well as naturally occurring markers.  It's a big topic, indeed some have spent years measuring, explaining, interpreting them, applying feel and science alike to the endeavour.  It's one of the few areas where science and spiritual understanding re-converge across the divide created just 400 years ago.

I, Scot, did not partake in this adventure.  I stayed in the glen floor looking for a stone that I have searched for often.  It's associated with the Fiana, an ancient standing army of semi godlike warriors from my Celtic past.  Yet again, I could not find it.  I hear rumour that it has been taken away by a local farmer and locked in a barn.  I'm not sure if for protection or spite.  Either way it's a pity.  It is like removing the stained glass window of Notre Dame for fear that the glass might crack.  Precautions can be taken.

Still, I told a Tale after dinner of a member of the Fianna, so maybe that will make up for it, bring back their essence.

Who knows what adventures Jenn, Charles and Les Angels will be thrust into tomorrow.
Actually, I do. Mwha Mwha Mwha!

On another note, things are geting awfy busy with the Jamie and Claire Tour.  Sam is hosting a private tour for Vicky and family in April, tailored to their wants and timings.  Then the May tour will come along just as quick. Currently there is a waiting list for it.  Donas (9 seater van) is full, but she can hire a Gideon (a second van, similarly bad tempered) if there are 3-4 more Outlandish Spirits.  I expect I'll be given the most bitey beast to control:  "Scot, van whisperer".  Sounds better than Aven's Cow Wisperering from the Grain Tour last year, maybe.

As I understand it, the variation on this May's tour is we'll be staying in Lallybroch (subject to confirmation from Jemmy and family).
Co-dhiu, anyway, it is late; the family are abed, the water still rushes down the falls outside and I have a magical adventure to co-create tomorrow.