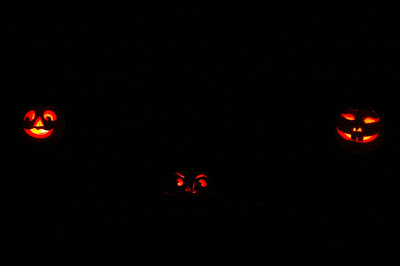 Thanks to Hamish Burgess of Maui Celtic for the following:
The Celtic New Year on the eve of November 1st, SAMHAIN (pronounced 'sha-ven' or 'sow-en' depending where you were), the Celtic Feast of the Dead, or the feast to the dying sun, marked the beginning of Winter, with the harvesting finished and the (photo of my three pumkins, sam) 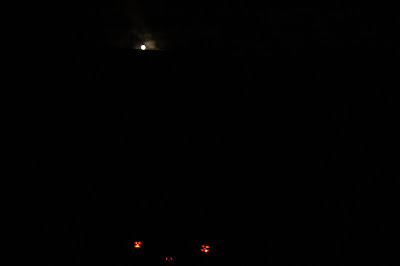 start of stockpiling fuel and produce. Bonfires were lit, and household fires extinguished to be rekindled later from the ceremonial fires, to welcome returning souls of the dead. The ancient Druids believed the Lord of Death, Saman, gathered together evil souls, and so the Irish called this evening Oiche Samhna (The Vigil of Saman). The goddess Bride or Brigit, ended her ruling season, and her straw crosses were put up to proect family and livestock. In Scotland, Cailleach Bheur, goddess of winter, began her reign. (3 pumpkins gazing up at the moon)

For myself, Samantha, the celebration is extra special, because my mom and dad met at a dance on Halloween. It wasn't until I was a bit older that I realized why he liked the celebration so much, besides the fact that he loved entertaining, telling stories and making people laugh. So, in a sense, you might say that I exist because of this celebration...cool. So in honor of my father and mother, I carved three pumpkins and no....that is not me in the middle!

The Celts believed on that night between the passing of the old year, and the arrival of the new, that the veil between our world and the Otherworld (or spirit world) was thinnest, and that spirits and faerie folk could visit the human world, and vice versa, and that you could contact your passed ancestors. That belief has continued with today's Halloween traditions of witches and ghosts, etc.

The Christian church took a festival they moved from a different time of year to Samhain, which they called 'The Feast of all Saints', on 'All Saints' Eve' or 'All Hallows' Eve', hence the term "Hallowe'en".

The tradition of children 'trick or treating' possibly came from the ancient practise of 'soul caking', when children went round collecting cakes in return for saying prayers for the dead. In later times, children wore masks and carried turnip or pumpkin lanterns, going door to door asking for apples, nuts or money, the disguises originally to stop them being recognised and taken by spirits.

The tradition of a turnip lantern, or more popular today, the "Jack O' Lantern" carved pumpkin, actually comes from the ancient Celtic practice of placing skulls of the dead on poles around the encampment, to drive away evil spirits.

Hamish is starting the New Year how he means to continue, immersed in creating Celtic art - the results so far are on the Gallery page at http://mauiceltic.com/gallery.htm